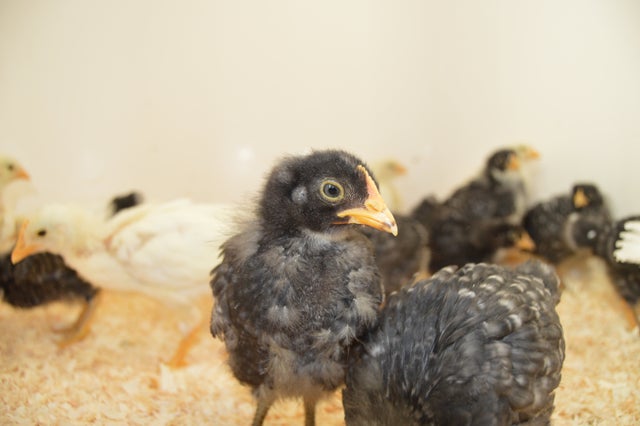 Our Chickens Normally spend the night in their coop, however they roam the orchard during the day.

Their Diet consists of what ever they find in the orchard, bugs, worms, grass, lettuces, what ever else chickens eat.

We supplement their free range diet with clippings of other products and/or non sellable lettuce, micro greens, edible flowers, as well as some of our leftovers which may include meats, vegetables, bread, etc. We normally place it in a bin inside their coop if they are in or out for when ever they want it.

We additionally supplement all the above with "Egg Layer Crumble" we purchase at our local feed store. This helps with egg production and keeps them spoiled with food abundance or is a higher percentage of their diet in the winter months.

Additionally we have 3 Water dispensers in their coop and normally at least one bowl outside the coop with water available for them at anytime. We will fill them with well or creek water depending on which hose we use.

In the winter time they do eat/drink snow.

We have Dominique and White Rock Chickens

We love our birds! They like to follow us around when ever we are doing things outside, and rush over when the grill lights up looking for a 5 star snack.

The Bird Story That Never Got Off The Ground

There are 4 generations of Chickens and 3 generations of roosters. The oldest is named Mr. Rooster (as seen on the Home Page) for good reason. He makes no friends, bites the hands that feed, however is not afraid to combat foxes (witnessed) and who knows what else with his long spurs and attitude from hell. He does a great job keeping the flock alive with constant bigger predators seeking a chicken dinner from the forest behind and skies above.

On the flip side is Regal who is Mr. Roosters Son. He is a 180 degree attitude from his father. He is a true Gentleman Rooster, and is the biggest most majestic bird in the flock. The youngest rooster is just a rascal who thinks he is tough but is bottom of the totem pole.

On the Hen side of things First Generation: Blondie, Foodie, and Mami. There were a few more but RIP. Mr Rooster was just a little guy at the time. Not very creative, but we weren't planning on naming these birds at the beginning so their name is what they are or do. Blondie is Blonde, Foodie is a food hog and pretty big, no offense.. Mami for some reason, until the third generation, was the only bird that sat on everyones eggs. We don't really know who is who's.. We actually think the latest chic is hers (she incubated at minimum) but another hen took it from her after it hatched.

Second Generation with Regal is two other hens one is really skittish the other is just mean.

The third generation is the crew of 19 its a free for all cant say much about them except there is one competing foodie 2.0 They are a mix of Blondies and Zebra looking birds with the one rascal youngest rooster.

The Fourth Generation is one chic so far.

The quality and flavor of our eggs may lead you to never purchase store brand eggs again...